How herpes “looks”, perhaps everyone knows. However, not everyone knows that its appearance is an “event” not only unpleasant, but also prognostically valuable. After all, the activity of the virus is possible only against the background of significant violations of general immunity. And long-term reduced immunity is the risk of not only infectious, but also autoimmune processes.

Close but not equal
Today, medicine identifies only 7 types of herpes that are significant for humans. And in this article we will focus on the first two: herpes simplex 1 and 2 (HSV 1 and 2). 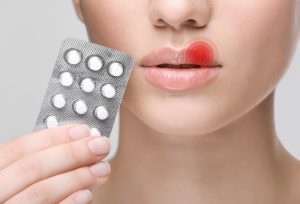 Both types are structurally very similar to each other, both (1, 2 or their combination) are detected in almost 90% of the adult population, both remain in the nerve ganglia for life, but differ in “preferences” for the organs affected and the likely consequences of their presence.

So, the first (or labial) type of herpes is known to many “under the name of a cold” on the lips. And in most cases it is “based” in this area. But in about 20% of cases it still “migrates” to the genital area, accompanied by signs of genital herpes.

In severe cases, HSV-1 can cause stomatitis, conjunctivitis, pneumonia, tissue damage (encephalitis) and meningitis (meningitis) of the brain, and various neuropathies.

The second (or genital) type of herpes is the second “in the ranking” of sexually transmitted infections. And it is capable of affecting the skin and mucous membranes of the external and internal genital organs.

In women, the presence of HSV-2 in a smear or the presence of a high titer of antibodies to it is associated with the risk of dysplasia and cervical cancer. And, according to some studies, it is detected in 78-98% of women with varying degrees of dysplasia, in 68-93% – at the initial stage and in 90-100% – at a pronounced stage of cervical cancer.

In addition, the persistence of HSV-2 in women is associated with chronic salpingoopharitis (inflammation of the ovaries and fallopian tubes), infertility and miscarriage. And an active infection during childbirth is fraught with severe complications for the fetus.

When immunity is limited

A distinctive feature of 1 and 2 members of the herpesvirus family is their ability to effectively evade the “supervision” of weakened immune mechanisms.

However, with normal immunity, antibodies to HSV are produced “in the same way” as to any other infection.

So, IgM and IgA) are found in the blood 2-3 weeks after the onset of clinical signs, they are a marker of an acute “fresh” or exacerbation of an existing infection, with the retention of antibodies up to a maximum of 1 year.

And IgG appears no earlier than 3-4 weeks and remains in the blood for years. True, they still do not give 100% protection against herpes, and their level strongly depends on the individual characteristics of immunity.

lack of interferon and distortion of its ratios (alpha, beta, gamma),
violations “in the work” of the compliment system,
decreased activity and / or number of T-lymphocytes, in general,
and their factions, in particular
violation of the number and activity of B-lymphocytes,
and many other factors.
Moreover, in people who regularly suffer from signs of HSV, immunity disorders, as a rule, have occurred since childhood. A blood test for immune status can help to find the “broken” link and draw up a therapy regimen.