Cervical cancer today is not only a serious medical, but also a significant social problem. After all, most of the identified cases fall on women of young and working age, and the age of “debut” has already dropped below the mark of 30 years. The shocking statistics of pathology is largely associated with the circulation of the human papillomavirus among the population. However, fortunately, not everyone develops the dangerous consequences of his “addiction”.

The HPV family, according to modern data, has more than 150 types. Some of them provoke the appearance of papillomas on the skin and genitals, while others are completely safe for humans.

How HPV works
The human papillomavirus, like all other viruses, is essentially a parasite.

Therefore, getting to the “destination”, HPV “forces” the cells to divide more actively, thereby contributing to the growth of the viral population. That, in the end, significantly distorts not only the structure of cells, but also the normal mechanisms of division. And such cells have a great chance of becoming tumor cells.

Infection routes
Human papillomavirus is often sexually transmitted. And, according to experts, almost every person is exposed to infection during his life.

True, in most people, the virus disappears asymptomatically without causing any harm at all. But any regularities of such “self-cleaning” are not known today. This means that it is impossible to predict the “outcome” of the infection in advance.

How to protect yourself 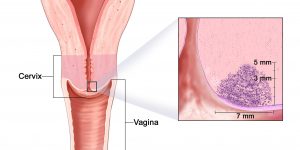 So, it is obvious that it is quite difficult to avoid HPV infection, and it is not possible to predict the “course” of infection. This means that the only measure of protection against cervical cancer is the earliest possible detection.

Methods of screening analysis of changes in cervical cells have already proven their effectiveness in developed countries, where the widespread examination of women using the PAP test has helped to significantly reduce mortality from cervical cancer https://en.wikipedia.org/wiki/Cervical_cancer.

Today science has made significant strides forward, and outdated methods have been replaced by much more accurate ones, for example, BD ShurePath liquid cytology with HPV typing.

The method reveals with high accuracy not only the presence of oncogenic types of the virus, but also changes in cells at the precancerous (dysplastic) stage.

At the same time, if desired (or necessary), the test can be carried out separately:

to identify HPV and determine its type
and on the degree of violation of the structure of cells (mixed smear from the cervix and cervical canal by liquid cytology, without HPV).
And this type of examination is more often used to assess the dynamics of treatment. Although it is legitimate for the primary detection of pathologies.