Anemia caused by a lack of vitamin B12 has been known to medicine for a long time, and was previously considered incurable, leading to the death of the patient for several months. Today, the problem is not treatment, but the identification of pathology in the elderly, for whom it is characteristic. Indeed, for this category of patients, most of the symptoms of B12-deficiency anemia are “a common consequence of old age,” which means they are not a reason for examination.

The elderly are 10 times more likely to
B12-deficiency anemia at a young age is a rather rare phenomenon, due mainly to a complete rejection of “animal” products or a malabsorption of vitamin B12 and occurs in about 0.1% of the population.

In the elderly, the prevalence of this pathology is 10-20 times higher, and is already 1-2% by the age of 75, and about 4% among the representatives of the older group. 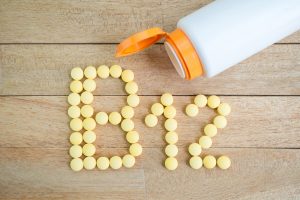 Moreover, this B-12 caused anemia is a rather multifactorial disease, and among the main reasons for its development:

lack of Castle’s intrinsic factor (produced by the stomach and necessary for the absorption of B12 from food),
deficiency of B12 in the diet
severe intestinal dysbiosis or helminthiasis.
1. Insufficiency of Castle’s intrinsic factor
It is not for nothing that this pathology ranks first among the causes of B12-deficiency anemia in the elderly, because absorption of B12 in the intestine is possible only in combination with the “gastric” factor.

In other words, the assimilation of vitamin B12 is severely impaired during atrophy (atrophic gastritis) or resection (removal of a part of an organ) of the stomach. While atrophic gastritis occurs in the elderly with a frequency of 70-80%.

The causes of atrophic gastritis are also diverse. But in the elderly, autoimmune aggression plays a significant role in this.

Antibodies to the parietal cells of the stomach or directly to the Castle factor itself are found in 90% of patients with atrophy of the gastric mucosa. However, today it is not clear whether they are an independent cause of such gastritis, or develop as against the background of an already existing disorder.

2. Heredity
Many clinicians pay attention to the “continuity” of the risk of B12 deficiency among close relatives. Indeed, 20-30% of patients with anemia and atrophic gastritis in the family already had (or are) similar diseases.

In addition, among patients without a familial predisposition, the average age at the onset of B12 anemia is 66 years, and with a burdened heredity – 51 years.

3. Deficiency of B12 in the diet
It’s no secret that older people often have a tendency to plant foods. Whereas the consumption of meat and dairy products, as well as eggs, is greatly reduced or stopped altogether. But it is these foods that are an irreplaceable source of vitamin B12, which also explains the frequency of B12 anemia in vegetarians.

4. Intestinal dysbiosis or “worms”
Vitamin B12 deficiency can also be caused by “simple competition”, since bacteria and parasites are quite “gluttonous” in relation to it.

In this case, the “accelerated” reproduction of bacteria contribute to the tendency of the elderly to constipation and the frequency of intestinal diverticulosis. And among helminthic invasions, the wide tapeworm is of greatest importance.

How to suspect a B12 deficiency
Weakness, fatigue, heart palpitations and other “classic” (iron deficiency) signs of anemia, with a lack of B12 are very weak. And, in most cases, they are forced to consult a doctor only upon reaching a severe degree of severity (hemoglobin at a level of 60-40 g / l or less).

At the same time, among the complaints provoking to seek help are symptoms of worsening concomitant diseases (angina pectoris, arrhythmia, ischemic heart disease and others), the decompensation of which is caused by prolonged oxygen starvation of tissues (hypoxia) and impaired blood flow.

Another, almost mandatory, sign of B12-deficiency anemia in the elderly is peripheral nerve damage, or funicular myelosis.

True, the signs of such neuropathy are detected only with a thorough examination, because: 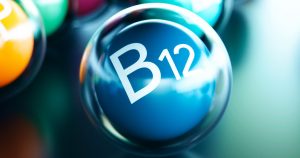 tingling
and impaired sensitivity
according to the elderly patients themselves, “the phenomenon at this age is normal”, and “the feet of the elderly are always cold”. And this means that such symptoms cannot be “for sure” a reason for examination.

At the same time, erythrocytes are characterized by irregular shape and / or size (macrocytosis). And the appearance of such deviations is due to the colossal value of vitamin B12 for normal DNA synthesis.

With a deficiency of B12, it is obvious that the most actively dividing cells “suffer” more strongly, and one of such systems is just the hematopoietic system.

2. Blood test for vitamin B12 https://en.wikipedia.org/wiki/Vitamin_B12

The appearance of characteristic deviations in the general blood test, it is necessary to clarify the cause of their occurrence. Because not all macrocytic anemias are B12-deficient.

3. Confirmed deficiency of vitamin B12, obviously, needs to determine the reasons, on which, obviously, the effectiveness of further treatment depends: