Thyroid hormones are known to have a tremendous impact on the course and outcome of pregnancy. However, we are talking not only about miscarriage, toxicosis, complications in childbirth or fetal pathologies, but also such complications as increased blood sugar. But how are glucose levels related to thyroid activity? And why is even mild hyperglycemia during pregnancy not as harmless as it seems?

They speed up metabolism, protein synthesis and transmission of nerve impulses. And during pregnancy, they are indispensable for the normal laying and development of organs and tissues of the fetus. 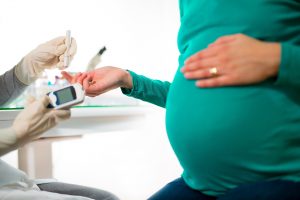 Lack of thyroid (“thyroid”) hormones threatens the baby with mental retardation and developmental delay, as well as significant metabolic disorders. And therefore, nature has made sure that before the fetus has its own active gland, maternal T4 and T3 are enough.

So, human chorionic hormone (hCG), which enters the blood from the membranes of the embryo, is very similar in structure to the pituitary hormone TSH. And that, in turn, is the main controller of the activity of the thyroid gland.

An increase in TSH levels stimulates the release of thyroid hormones, and hCG “copies” this action. As a result, the level of T4 and T3 during pregnancy, physiologically, increases by 30-40% of the norm, and TSH is reduced (as “unnecessary”). But this condition is completely normal and does not require any treatment.

At the same time, an excess of “thyroid” hormones is accompanied by an increase in the cell’s appetite for glucose (since they accelerate metabolism), and the lack of T4 and T3 suppresses this appetite, which is inevitably reflected in the level of glucose in the blood.

In this case, hyperglycemia (increased glucose), according to numerous studies, can be observed both in the case of a deficiency or an excess of thyroid hormones, due to the extremely complex “relationship” of the latter with insulin. And a long-term excess of “sugar” in the blood is a serious risk of insulin resistance.

miscarriage,
polyhydramnios
infections
complications of childbirth,
the birth of a large fetus (> 4 kg),
in some cases, fetal developmental delay,
On the mother’s side, there is excessive weight gain, skin itching, increased blood pressure, and an increased risk of severe toxicosis.

Who is at risk

Increased attention to the level of “sugar” in the blood, even in the case of a healthy thyroid gland, is required for women prone to insulin resistance, that is: those who were overweight before pregnancy, type II diabetes in relatives or a violation of glucose levels in a previous pregnancy.

And another risk group, obviously, are pregnant women with thyroid pathologies, both explicit and latent, since increased loads on the gland during pregnancy can provoke the onset and worsening of the disease.

Latent or slightly noticeable symptoms of “thyroid problems” may be due to iodine deficiency, which is widespread throughout Russia and Europe, as well as the action of antibodies against the tissue of the gland. And the earlier treatment is started, the lower the risk of carbohydrate disorders during pregnancy.

How to check
For a full assessment of the state of the thyroid gland, risks and its existing pathologies, a blood test is recommended for:

TSH,
T4 and T3 https://en.wikipedia.org/wiki/Triiodothyronine are free,
as well as antibodies to TPO and TG (which is the second, after iodine deficiency, the cause of hormone deficiency).
Studies can be passed individually or as part of a complex (for example, “Thyroid gland, screening). And it is recommended to supplement the blood picture with data from an ultrasound examination of the thyroid gland.

Such screening is more than reasonable, starting from the earliest stages of pregnancy. And it is best to go through it even at the planning stage.